Poised as we are on the brink of Brexit, it seems cannily appropriate for Creative Assembly to release a game all about the era in which England became a nation. Starting off in 878 AD, Thrones of Britannia sees Alfred the Great on a quest to push back against a Viking invasion from the North East, with the aim of unifying the land under the banner of the Anglo-Saxons. Admittedly, my clumsy first attempt at controlling the great monarch saw him perish within two years, Wessex fall into civil war, and my armies starve, but the point still stands.

Read about the unlikely ways Warhammer inspired Thrones of Britannia.

Alfred’s story is just one of many you can potentially screw up: the game gives you the option to play as ten factions, each with different alliances, strengths, and objectives. For instance, you could opt to play as the Welsh king Anaraut on a mission to unite Wales, the Irish king Flann on a quest to become High King of Ireland, or the Scottish king Aed as he attempts to repel rival clans and resist the Viking invaders. 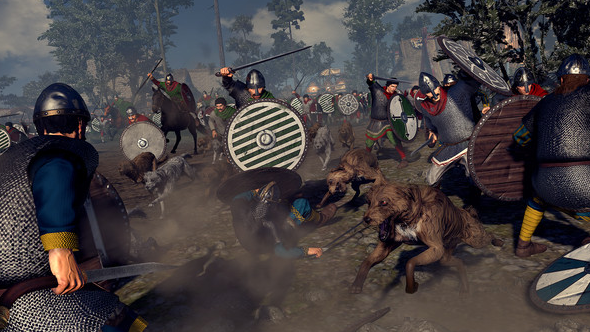